Does your company have a therapeutic candidate (small molecule, monoclonal antibody, combination product, or other) for the treatment of a type of cancer? Does your therapeutic candidate have multiple indications for multiple types of cancers (e.g., drugs targeting reactive oxygen species [ROS] or cell surface receptors [GPCRs, EGFR]; protein inhibitors [Hsp90, ATR kinase]; epigenetic enzymes [LSD1]; or combination therapies [erlotinib + artesunate, antibody-directed enzyme prodrug therapy])? If so, the Congressionally Directed Medical Research Programs (CDMRP) can offer a great source of non-dilutive funding or capital (NDC) for many small businesses working on biomedical innovations. In particular, many of the CDMRP programs focus on cancer and this can supplement internal dilutive R&D funding and NIH funded R&D. This spans numerous award types that can provide NDC for basic research, in vitro, animal models and clinical trials.

Nearly everyone has been affected by cancer in some way, whether through fighting it themselves, caring for a loved one with a cancer diagnosis, or losing a close friend to cancer. Our warfighters are no less affected by the many types of cancers, and are often at an even higher risk of developing cancer due to environmental exposures during deployment or from their occupational exposures. This is why the CDMRP Cancer Programs have and will continue to be highly funded in order to support impactful research that gets us closer to the goal of effectively treating and preventing all cancers.

In addition to the current Cancer Research Programs (breast, kidney, lung, ovarian, and prostate cancers), there are additional CDMRP programs that often include cancer-focused research topics. We will look at all of these cancer research programs in more detail below.

The Breast Cancer Research Program (BCRP) challenges the scientific community to design research that will address the urgency of ending breast cancer. Specifically, the BCRP seeks to accelerate high-impact research with clinical relevance, encourage innovation and stimulate creativity, and facilitate productive collaborations. The BCRP pre-announcement is typically released each January, with program announcement releases starting in May. In FY17, pre-applications/letters of intent (LOI) were due starting in June, with full applications due either within one month of the LOI due date or approximately 2.5-3 months of the pre-application deadline. 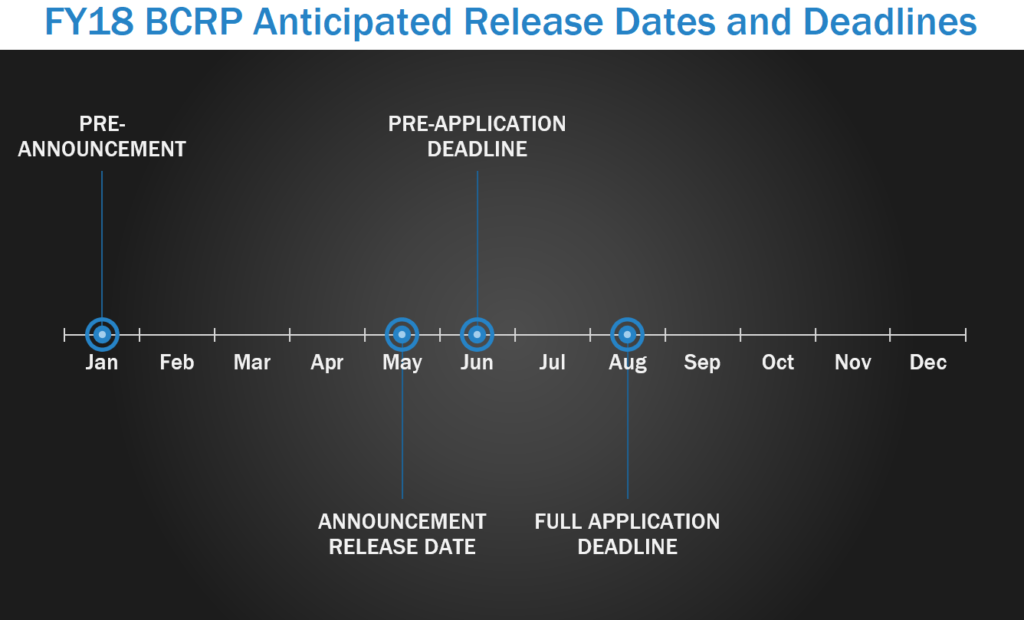 The FY17 BCRP Overarching Challenges which must be addressed by research proposals include:

As the very first research program of the CDMRP, the BCRP has been appropriated more funding than any of the other CDMRP programs at a total of $3,406.1 million since its inception in 1992. 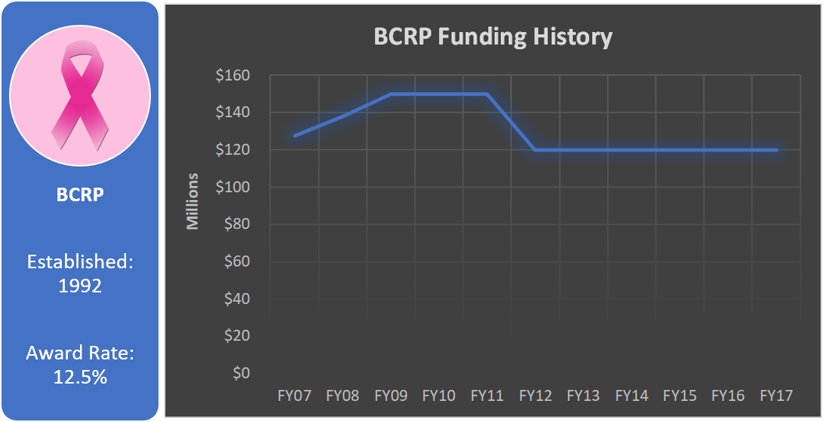 The Kidney Cancer Research Program (KCRP) is a newly-established program focused on the prevention, detection, treatment, and the long-term effects of treatment for kidney cancer for Service Members, Veterans, their families, and the American public. As the KCRP was just established in 2017, it is not easy to predict future release and/or due dates. For FY17, the pre-announcement was released in September, with program announcements released in October. Letters of intent (LOI) are due in December, with full applications due within one month of the LOI due date. 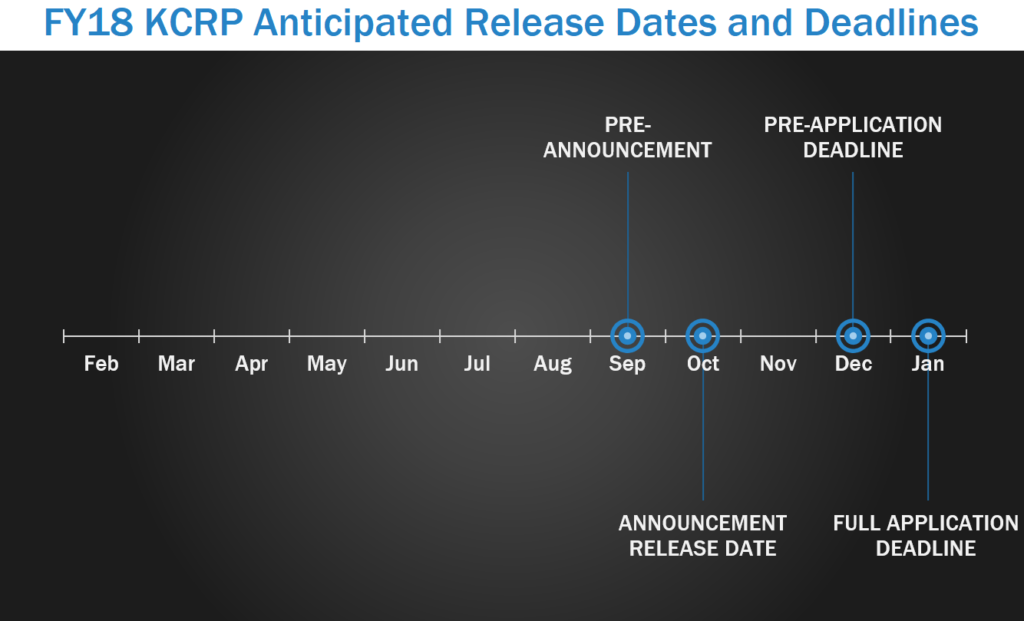 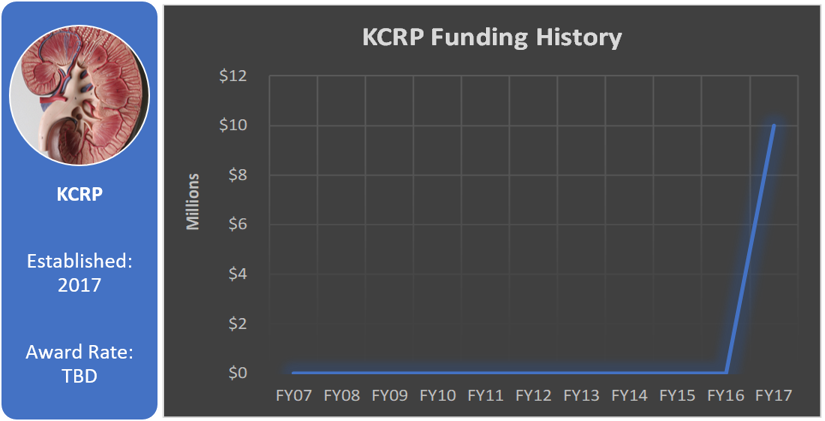 The mission of the Lung Cancer Research Program (LCRP) is to support and integrate research from multiple disciplines for risk, assessment, prevention, early detection, diagnosis, and treatment for the control and cure of lung cancer. Several factors have been shown to contribute to the development of lung cancer, smoking and exposure to environmental carcinogens being the most prevalent, but many people who do not smoke also develop lung cancer each year. Importantly, military personnel are at a higher risk of developing lung cancer than the general population due to increased rates of smoking as well as an increased likelihood of being exposed to environmental carcinogens during their service. The LCRP pre-announcement is typically released by March each year, with program announcement releases starting in May. In FY17, pre-applications/LOIs were due starting in June, with full applications due either within one month of the LOI due date or 3 months after the pre-application deadline. 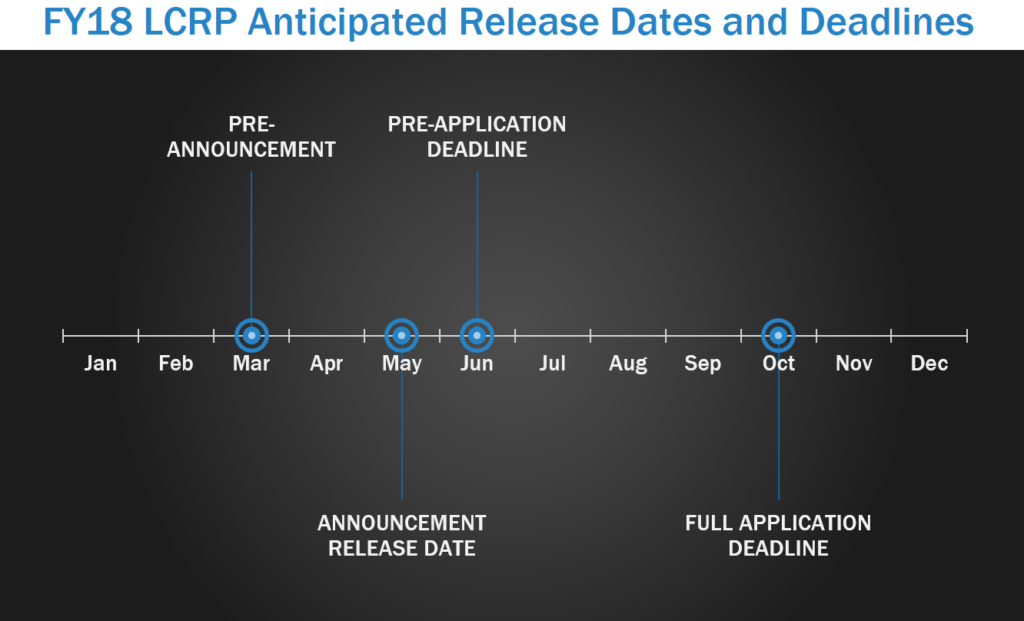 The FY17 LCRP had seven Areas of Emphasis: 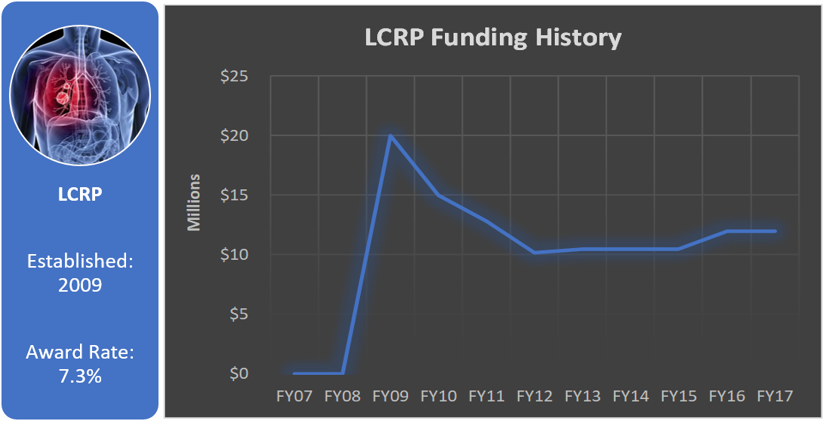 Ovarian cancer is the leading cause of death among gynecological cancers each year and ranks fifth in all cancer deaths among women. The Ovarian Cancer Research Program (OCRP) supports patient-centered research to prevent, detect, treat, and cure ovarian cancer. The OCRP pre-announcement is typically released around January or February, with program announcement releases starting in May. In FY17, pre-applications were due starting June and full applications were due in late August or early September. 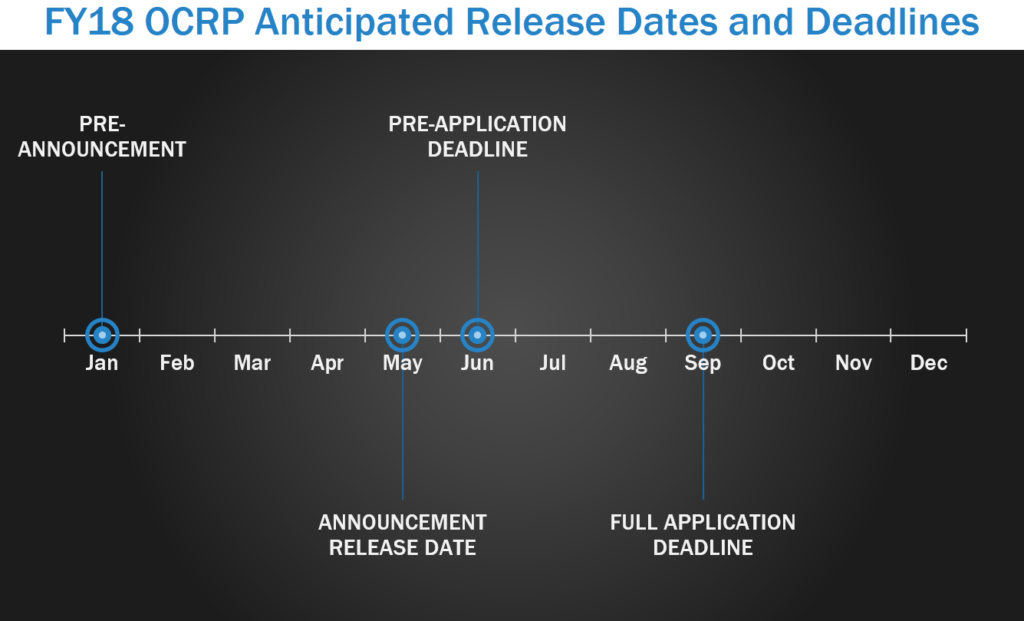 The FY17 OCRP Areas of Encouragement were: 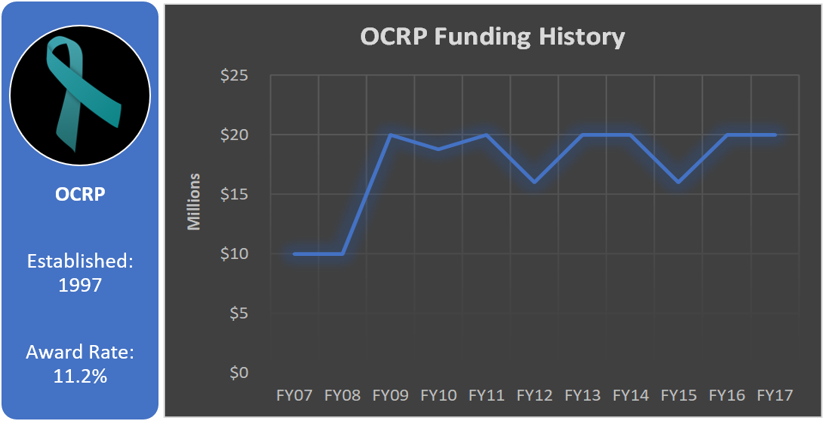 Prostate Cancer is the most commonly diagnosed cancer in men and is the second most common cause of male death from cancer. The Prostate Cancer Research Program (PCRP) funds research that will lead to the elimination of death from prostate cancer and enhance the well-being of men experiencing the impact of the disease. The PCRP pre-announcement is typically released between February and April, with program announcement releases starting in May. In FY17, pre-applications/LOIs were due starting in July, with full applications due either within either one month of the LOI due date or approximately 3 months after the pre-application deadline. 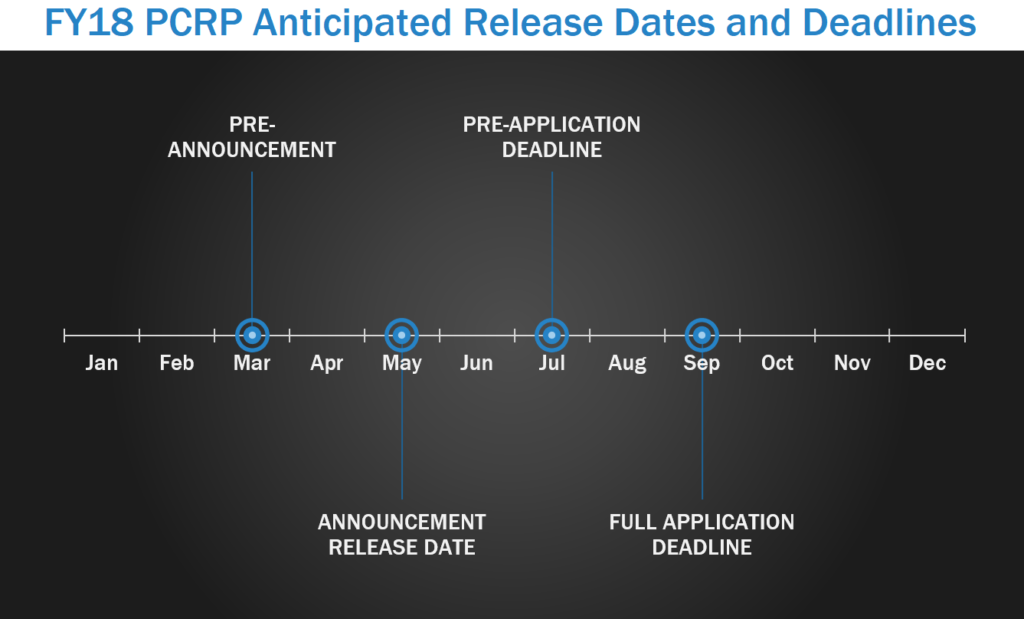 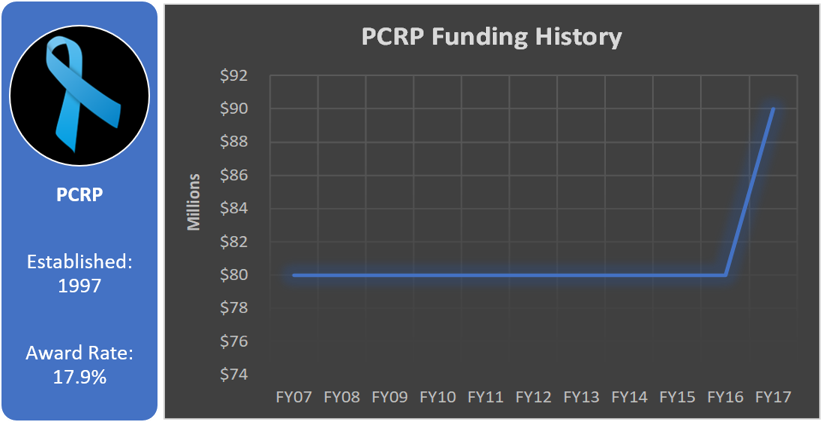 The Peer Reviewed Cancer Research Program (PRCRP) funds innovative basic, applied, and translational cancer research to support Service members, their families, and the American public. Members of the military are exposed to hazardous environments due to the nature of their service and deployments and are at risk for the development of many types of cancer. The PRCRP pre-announcement is typically released in March each year, with program announcements released starting in May. In FY17, pre-applications were due in June, LOIs due in September, and all full applications due in October. 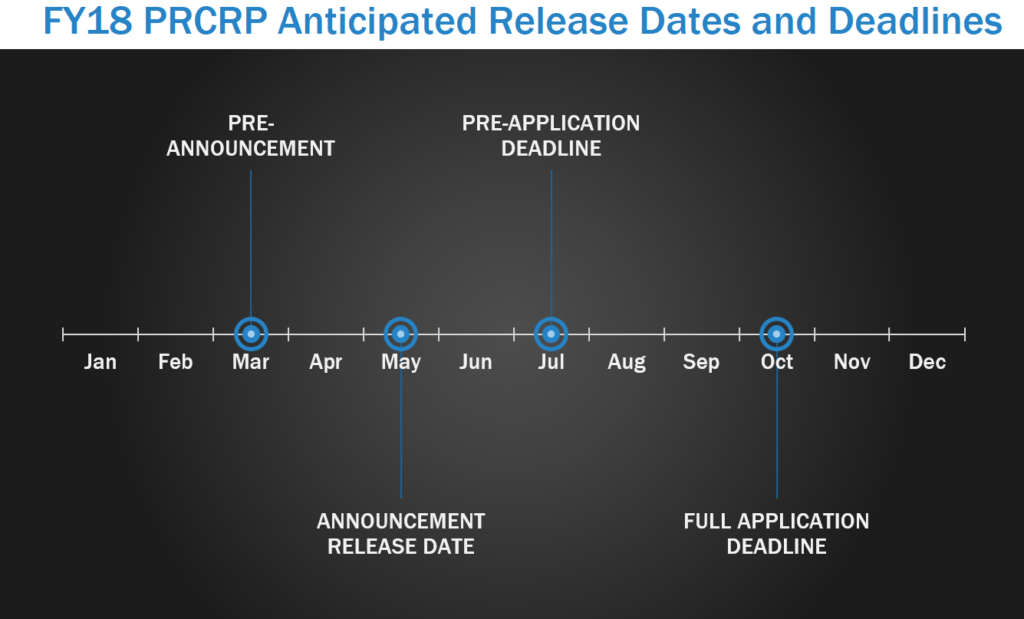 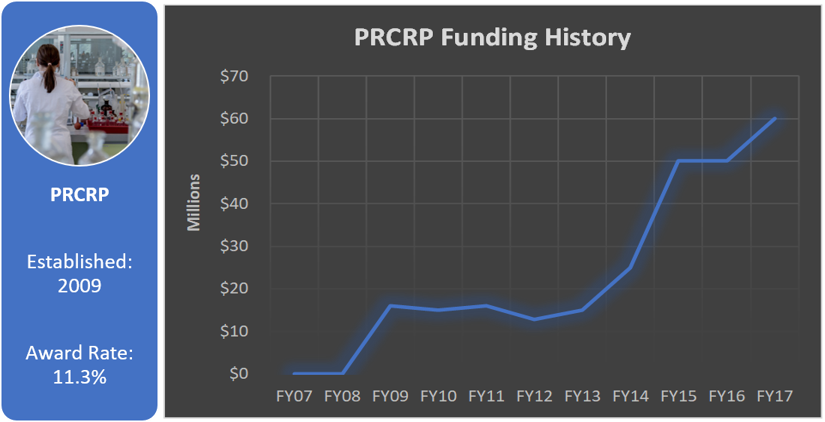 One PRMRP Area of Encouragement included for FY16-FY17 in Integrative Medicine was research on the use of integrative medicine strategies, such as meditation, tai chi, acupuncture, and/or herbal medicine/nutritional supplementation, to improve the psychological health and quality of life in cancer patients and survivors.

If your small business concern (SBC) is developing cancer therapeutics (vaccines, small molecules, monoclonal antibodies, or compound candidates) or an innovative dual-use technology in one of our other 2018 technology focus areas (orthopaedic trauma tech, sensors/internet of things [IoT], traumatic brain injury [TBI]), we may be able to assist by:

If you would like more information on how Tier Seven can assist your small business with identifying, connecting and collaborating via CRADAs with other DoD researchers, please contact us.