HomeBlogHow Many CRADAs are Implemented by the DoD and Other Federal Agencies Each Year?

How Many CRADAs are Implemented by the DoD and Other Federal Agencies Each Year?

Cooperative R&D agreements (CRADAs) and other DoD technology transfer mechanisms (e.g., licensing, patents, and publishing) help to convey knowledge, ownership rights, or establish formal research agreements between Federal and non-Federal entities. Of these instruments, CRADAs provide a convenient mechanism for these entities to collaborate, but how many CRADAs are completed by each Federal entity each year?

Asking questions like this is important for a company when considering if they should build a long-term business relationship with a Department of Defense (DoD) Service or a Federal Agency. A recent question we received was, “How many CRADAs do the U.S Army, NASA (National Aeronautics and Space Administration), or the VA (Department of Veterans Affairs) complete each year?” It might be assumed that when entering the frequently uncharted world of the Federal Government it will be made easier by working with a Federal entity that completes many CRADAs with industry each year. This assumption is true in some ways, such as processing and logistics, but we always let these companies know that thousands of small businesses have entered into CRADAs with Federal entities. Finding the Federal collaborator or principal investigator (for biomedical and human systems technologies) with the best fit for subject matter expertise, access to unique resources (other than funding as no funds are provided to the non-Federal entity via a CRADA), and bandwidth to collaborate are the most important first steps for initiating and developing a CRADA.

With thousands of researchers, scientists, and clinicians in the DoD, Federal agencies, and Federal Labs/Research Centers whom are actively seeking collaboration opportunities with industry, it is a great time for your company to consider implementing a CRADA.

There are separate references available on how many CRADAs are completed annually by some of the DoD services, but the actual numbers for each DoD Service and Federal entity is not something that can readily be found in a single location. To compile the most recent CRADA information, we collected data from one year (fiscal year 2014 or FY14) for some of the Federal Agencies and aggregated DoD. However, it was also necessary to capture FY12 and FY13 data from the Air Force, Army, and Navy to provide some service-specific numbers. 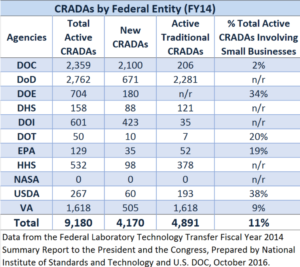 Annual data on licensing and CRADA data from numerous Federal Agencies is compiled in the “Summary Report to the President and the Congress” for Federal Laboratory Technology Transfer. This report is published by the National Institutes of Standards and Technology (NIST) in the U.S. Department of Commerce. The most recent data was published in October 2016 and represents FY14 information. The completion of the summary report fulfills the requirement of Title 15 of the U.S. Code, Section 3710(g)(2), to summarize the use of technology transfer authorities by Federal agencies. 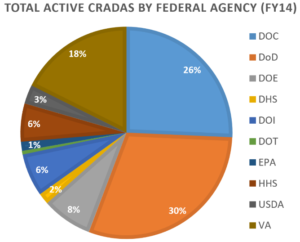 The DoD is unique in its requirement to provide mission-focused technologies or capabilities to our warfighters. Through its extensive procurement and acquisition mechanisms, the DoD also purchases products and systems so that our warfighters must never fight a fair battle. To accomplish this mission, the DoD utilizes numerous technology transfer statutory authorities to promote and facilitate the commercialization of operational capabilities or technologies with dual-use applicability (i.e., both military and civilian uses). ith the highest number of total active CRADAs of the Federal entities listed above, DoD CRADAs play an important role in facilitating mission success. In FY14 per the NIST report, DoD reported the largest number of CRADAs for all Federal agencies: “Total Active CRADAs” was 2,762, “New CRADAs” completed was 671, and “Traditional CRADAs, Total Active” was 2,281. Please note that it is also possible to capture DoD CRADA information and cross check some of the NIST report data by searching DoD Service-specific Technology Transfer offices (Air Force, Army MRMC, Army ARL, Navy ONR, Navy NRL), online sources and summaries from the Defense Laboratory Office (DLO) in the Office of the Secretary of Defense (see the chart titled DoD CRADAs – FY12 and FY13; data is from FY12 and FY13 DLO data). For comparison purposes, FY12 data is also listed in the graph for each DoD component. 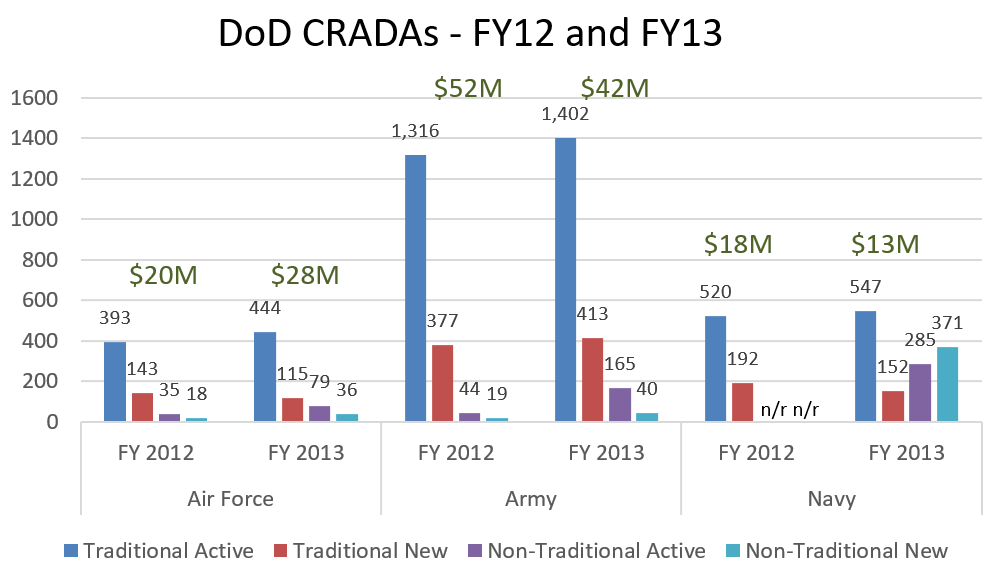 This article provides information on the number of CRADAs completed by the DoD and some Federal entities, although it is not comprehensive or considered “complete”. Please comment or suggest links to additional CRADA resources or have helpful information for the Defense Advanced Research Projects Agency (DARPA), Defense Threat Reduction Agency (DTRA), Missile Defense Agency (MDA) Advanced Research, Joint Improvised-Threat Defeat Organization (JIDO; now with DTRA), Special Operations Forces Acquisition, Transition & Logistics (SOF AT&L), or other Federal entities that provide the RDT&E and AT&L for delivering the most effective capabilities for our warfighters. At Special Operations Forces Industry Conference (SOFIC), SOF AT&L described its unique and efficient approach to overarching CRADAs that we will describe in an upcoming article. On the Tier Seven CRADA Resources page are open access instructions, guidelines, CRADA models/templates, and other information on CRADAs for the Air Force, Army, Navy, VA, and Special Operations Command (SOCOM). We will continue to compile additional information for a follow up article or post.